According to the World Health Organization, Alzheimer’s disease (AD) is the most common type of dementia, diagnosed in 70 to 80% of cases. In Brazil, data from the Ministry of Health indicate that about 1.2 million people have the condition, and 100,000 new cases are diagnosed every year. Despite the staggering numbers and more than a century since the discovery of the disease, AD is still not completely understood, and there are no effective therapies for its control or cure. However, a recent study might be paving a new path for disease treatment, renewing hopes for millions of patients and family members who live with the problem around the world.

Recently published by the Molecular Therapy scientific journal, the research used mice to evaluate the action of a lab-developed antibody, the NUsc1, in the inhibition of molecule clusters that damage brain connections in Alzheimer’s disease. The study was a collaboration between the D’Or Institute for Research and Education (IDOR), the Federal University of Rio de Janeiro (UFRJ), and the University of São Paulo (USP) – Ribeirão Preto, in addition to several research institutions in the United States, Argentina, Canada, and France. But first, to understand the relevance of this research, we need to go a little into what the scientific literature believes is the cause of Alzheimer’s disease.

Beta-amyloid is a protein responsible for relevant processes in brain function when it is present as isolated molecules (monomers) and in small amounts. In some cases, when their production is excessive or their removal from the brain environment is not properly performed, these molecules begin to cluster, forming oligomers with 2 to 12 monomers, and even beta-amyloid fibers or plaques, which have thousands of these proteins. The amount of beta-amyloid molecules in the cerebrospinal fluid (present in the brain and spinal cord) is one of the main early markers of AD, and agglomerations of this protein create barriers that interfere with neural connections, the synapses.

The few recent treatments addressed to the disease are immunotherapy with monoclonal antibodies, which are applied intravenously to act on a specific target. In the case of AD, the target of these drugs are beta-amyloid plaques (check out the Learn More chart), however, none of them have the effect of significantly delaying the progression of the disease and are still associated with many adverse effects, such as brain inflammation, which turns out to be detrimental to the disease.

“Some people believe that plaques also cause memory problems, but this hypothesis is no longer valid, as we know today that there are people who have many plaques in the brain and have a good memory, and people who have significant memory problems and have few plaques in their brains, so the correlation between memory loss and plaques is unclear. The issue of oligomer-related synapses is more relevant,” explains Dr. Sérgio Ferreira, study coordinator, professor at the Institutes of Biophysics and Medical Biochemistry at UFRJ, and associated researcher at IDOR.

Aducanumab – In June 2021, the FDA approved the first Alzheimer’s drug in 20 years from Biogen company. Aducanumab is a monoclonal antibody designed to reduce the beta-amyloid plaques that build up in people with the disease. Its approval was controversial and questioned by the scientific community, as the drug offered considerable risks, and the ability to reduce plaque did not prove to be relevant for the disease.

Lecanemab – Presented in December 2022 at an international congress on Alzheimer’s, the drug, also by Biogen in partnership with Eisai, showed in its first results the ability to act on beta-amyloid protein plaques and reduce cognitive and memory decline in patients with mild symptoms. Despite being an important finding, this reduction wasn’t clinically relevant for the disease, and the drug can also cause neuroinflammation.

For over 20 years, Dr. Ferreira has been leading a research group aimed at investigating the role of beta-amyloid oligomers in AD. “Since they were described as possible toxins in AD, 24 years ago, more than 5,000 scientific articles show the possible negative impacts of these oligomers on the functioning of brain synapses, and many of these papers came from our group. Since the beginning of the 2000s, we have studied this topic”, he informs. He explains that beta-amyloid plaques may not be so important for AD because they accumulate in specific areas, while the oligomers are soluble and circulate in the cerebrospinal fluid, and, since they are smaller, bind to neurons, damaging synapses in several parts of the brain, which would cause further memory loss and mental confusion.

“It is believed today that plaques are a kind of a garbage dump, a place where the brain accumulates that toxic protein to minimize the problem. On the edge of this ‘dump’ you will have problems, but not far from it. Oligomers, on the other hand, would be like small garbage bags, they are soluble and dissolve in the cerebrospinal fluid, and they wander around the brain attacking the synapses. For example, it is as if the plates were a sanitary landfill and the oligomers the scattered garbage on the streets, and the latter, yes, will block sewers and cause flooding”, facilitates the scientist.

Interested in a way of targeting these oligomers alone, the authors of the article used an artificial mini antibody, which was developed in 2017, in a scientific collaboration of the group in another study. “This started years ago, with Dr. Adriano Sebollela, in a collaboration between Northwestern University, in the USA, USP Ribeirão Preto, and UFRJ. He identified natural antibodies that preferentially bind to oligomers. From there, he sequenced the DNA that gives rise to the antibody, and we took the little piece of the genetic sequence responsible for the recognition of this oligomer to use it for the creation of the artificial antibody, the NUsc1”, he recalls.

But the way of applying these antibodies did not favor their clinical use, as it would be necessary to perform periodic injections in the patient’s cerebrospinal fluid. “That’s when we thought, ‘What if we could teach our neurons to produce this molecule?’ So, we put the NUsc1 DNA genetic sequence in an attenuated viral vector capable of infecting neurons, but which, instead of causing disease, causes the neuron to start producing that molecule. It’s gene therapy. We’re modifying the cell’s genetics so that it produces something it couldn’t produce before. In this case, we are teaching the neuron to produce an artificial and tiny antibody, incapable of causing neural inflammation”.

The study was performed in mice with AD. The viral vector was injected only once, and it was observed that the rodent neurons began to produce NUsc1. The results were also as expected: the proliferation of antibodies reduced memory impairment induced by beta-amyloid oligomers and, notably, reversed memory deficits in mice, a result of potential relevance for the scientific community and for people affected by Alzheimer’s Disease.

When asked about the future of this discovery, Dr. Sérgio seemed hopeful, however, informed us that there is still a lot of research and tests to be done. “An important next step would be to get partnerships in the biopharmaceutical industry to optimize the delivery and to apply it in a future clinical trial. We started this research more than seven years ago, and at the time this viral vector was the best we had. Today there are already better vectors. Instead of injecting the virus into the patient’s brain, perhaps we could do it through the blood, which would be less invasive, and the virus would reach the brain through the blood-brain barrier. But, before even thinking about trials with people, we would need to test in animal models closer to humans, such as other primates, to better understand the safety. It would be a big leap to jump from the effects observed in the brains of mice straight to a research involving human beings”, clarifies the researcher.

Even though it is still very inceptive to be considered a future therapy, the new discovery is, at the very least, optimistic for the diagnosed people, their families, and caregivers who live with AD, especially when for more than 100 years there has been a lack of efficient drugs with little adverse risks to patients. 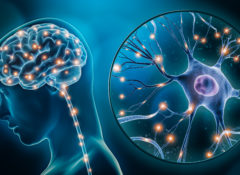